Home > Blog and Latest News > News Report > Robots for medical use – a cure to illnesses or a disease to kill? 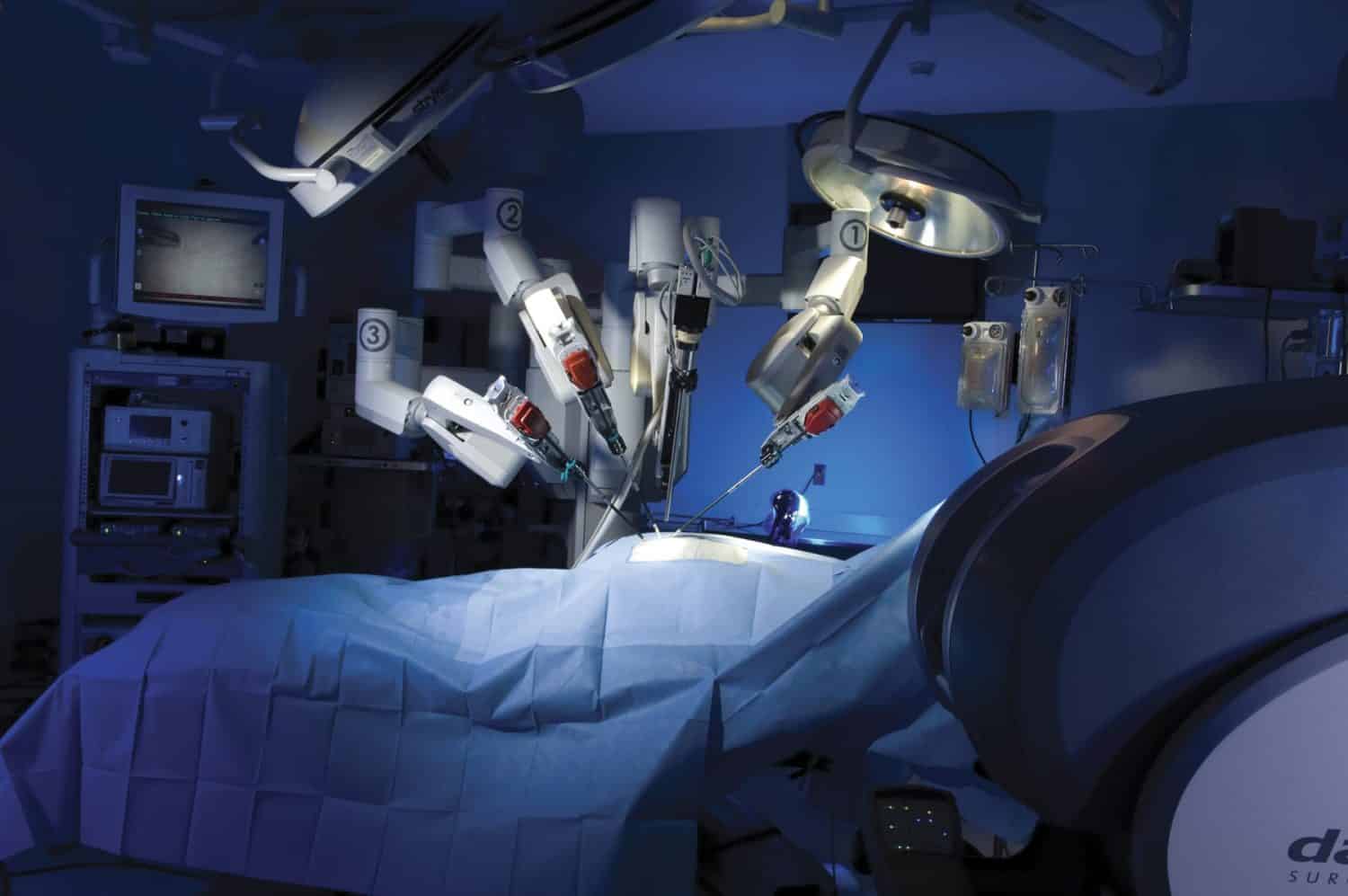 There has been a lot of debate on whether the future of medical robots will help or threaten healthcare; a force for good, or a disaster ready to occur? A medical robot is a robot that uses precise methods to gain access to areas under operation. There are different types of medical robots; for instance, disinfection robots manufactured by Xenex are able to disinfect a whole room within minutes using ultraviolent light technology.

This article will focus on surgical robots which allow operations to be carried out via the robot rather than a human surgeon, through the use of a ‘telemanipulator’; which is used to transmit the surgeons hand and finger movements to a remote robotic device. Robots will never truly replace doctors, however if they are used in addition to them, they can improve the quality of operations.

An example of a surgical robot currently being used is the ‘Da Vinci’ located in St. Mary’s Hospital, famous for its starring role in the blockbuster movie ‘Die Another Day.’ Through its three key features, it is thought to eliminate many problems which occur when a surgeon undertakes an operation. Firstly, the robotic arms consist of the surgical instruments along with a high-definition camera, which is better at providing a detailed image of the body, compared to the human eye.

The second feature is the instruments used to precisely manoeuvre the robotic arms in accordance to the movements the surgeon makes at the console. Thirdly, the surgeon’s console is where the surgeon sits to direct the surgery, consisting of a screen, which provides enhanced, real-time 3-D images of the operating site. These features provide a better visualisation and precision for the surgeons, which is particularly beneficial for complex surgeries such as that of the chest, where the risk is very high. However, there are concerns that robotic surgery removes the doctor-patient relationship which is fundamental when undertaking operations. A big part of patient care is reading body language and facial expressions in order to sense discomfort.

A robot’s ability to recognise emotions is currently weak, therefore cannot detect any concerns which may arise mid-operation, which is their major weakness. On the other hand, the majority of research concludes that surgical robots and doctors should work hand in hand. The fact that operations are overseen by a surgeon means that the patient gains the benefits of the robot, whilst maintaining those of having a surgeon present.

The doctor is able to take control of the operation, whilst the robot allows precise movements which reduces discomfort. In addition to this, it is thought that the Da Vinci robot reduces hospitalisation time as they perform minimally invasive surgery which results in smaller incisions, causing less pain and scarring, thus increasing recovery time. This is beneficial for both the hospital (due to an increase in efficiency as more patients can be treated in the same period of time) and the patient (due to an increase in their quality of life). Overall, the move towards surgical robots should be welcomed within the medical field since when used alongside a human surgeon, their benefits are vast.

There has been extensive research undertaken in the use of surgical robots for the use of astronauts. Surgery in space is a massive challenge; even something as simple as putting a plaster on is difficult without gravity, causing astronauts lives to be at risk if a medical emergency were to occur as they have a limited amount of resources on board the International Space Station (ISS). This problem is exacerbated by the fact that space capsules can only carry a limited amount of weight, so medical tools must be relatively light. Nebraska based company ‘Virtual Incision’ have developed a robot surgeon designed to slip into the body via an incision in the abdomen, which once inside, can remove part of a diseased organ.

This is particularly useful for future long distance missions such as to asteroids or Mars, where getting home quickly in the event of an emergency isn’t an option. However, many argue that this would cause more harm than good since the ISS is only capable of carrying basic medical supplies, and so it would not be feasible to hold an entire robot. Additionally, it is thought that this would come at the cost of other facilities needed for survival; such as food or even the exercise equipment which is crucial for the astronauts. There is also the issue of ensuring that engineers specifically trained to fix these robots needing to be present, which can cause problems during the recruiting process.

Therefore, this raises questions on the extent to which a surgical robot would truly benefit the astronauts and scientific research, or whether it would cause further problems which may be detrimental. To counter some of these issues, the robot is expected to weigh 400g, which NASA claim is sufficient enough to be held on board. If its proposed weight holds truth in the final design, the robot will be much better at tackling medical emergencies than the current astronauts are capable of. The short term goal is to train astronauts, ensuring that they have the relevant knowledge to perform surgeries on each other.

This would tackle the problem of needing to communicate with people back on Earth, which would not be possible due to time delays in communication signals. In the long term, it is anticipated that the robot will have an ample amount of medical knowledge in order to perform operations independently. As a result, astronauts can feel secure that complex surgeries are possible, and so the health risk when on the ISS will be reduced.

Surgical robots are advantageous within our planet as they allow remote surgery to take place; which is where a human surgeon is not physically present with the patient. This can be hugely beneficial to patients facing rare illnesses, where the number of specialist doctors are limited. Remote surgeries would allow doctors to carry out operations without having to travel directly to the patient, or vice versa, allowing the patients to be treated quicker (before the illness is worsened). From a doctor’s perspective, this would be beneficial as they can spend more of their time treating, rather than traveling to hospitals.

Currently, remote surgery is not a widespread technology as there are problems regarding communication signals (particularly in low income countries who may not have the relevant equipment necessary for high quality communication signals), and the extent to which it is financially feasible. However, with its vast benefits and extensive research into the field, it may well be part of our everyday lives in the near future. Ideally, remote surgeries will benefit people where the quality of healthcare is poor at their local hospitals, however it is very unlikely that we will face these benefits within the next few years. If this were to be possible, despite how long it may take, it would allow the expertise of doctors to be available worldwide which can only be positive.

Ultimately, surgical robots hold a vast number of benefits; reducing the risk of infections, causing minimal scarring and reducing the time spent at the hospital, along with benefiting astronauts in the event of a medical emergency. Although there is more which needs to be done before this is implemented in most hospitals; in terms of research and consideration of costs, it would not be surprising if this becomes the normal means of operating in the near future.