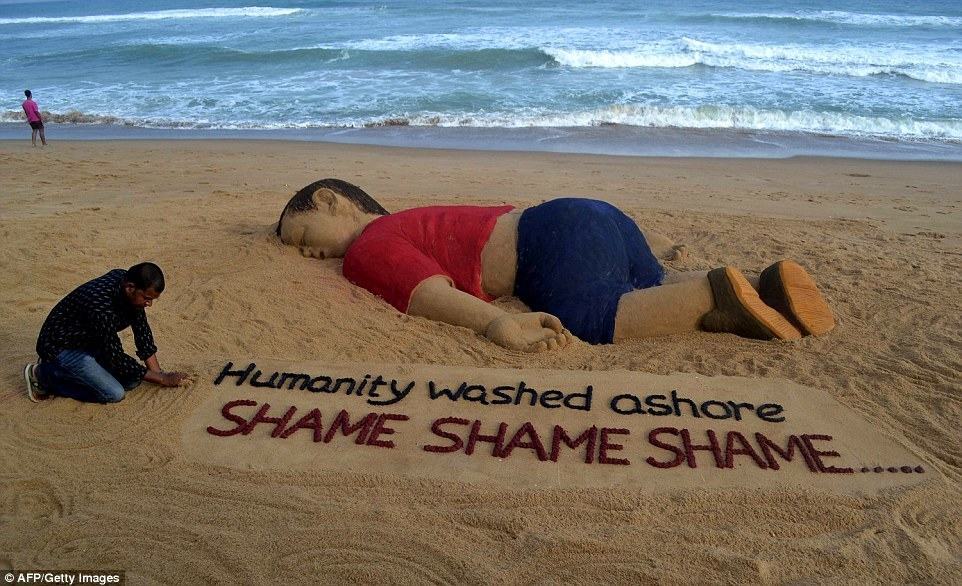 It has been an interesting, somewhat eye opening and shocking experience to see the other side of the responses to the refugee situation. In my comfortable bubble of left wing socialist pride, I hadn’t dared to venture into the worldly visions of the other side…the extreme right.

Alas, temptation had made me succumb to my other interests and enter the world of right wing extremist views. Boy, they had put up some pretty interesting arguments. Some of them I felt very uncomfortable responding to, why? It’s because it felt strange to explain to a 60 year old man living in social housing (the irony- will explain later) about the complex politics of the Middle East, without opening up another can of arguments to stem from that. I was desperately trying to stick to my points, but, usually- a universally known fact, when your opponent can’t stick to their facts they go off and try to attack you personally.

1. We have servicemen and women in our country, who need to be rehoused. Take care of your own before looking at others.

Response: A certainly valid point, bravo. There are 9000 ex servicemen who are homeless, and it is something that demands attention and should be rightly addressed. However, can I just ask why you were not arguing for the public to rally a petition through to the government about a couple of months ago, when the refugee situation wasn’t very much media known? I get it, it’s the idea of ‘your own’ come first. However, it is a far greater insult to ex servicemen to only think of them when the situation of refugees come up than think of them during any other time. Please, rally for the government to sort out the situation of these servicemen, whilst also support a humanitarian crisis.

2. Why don’t other Arab states take them in, they’re all Muslim after all.

Response: Lebanon hosts just over a million refugees, it’s a tiny country in comparison to its other surrounding states. There is some truth to that argument about other Arab states taking them in- but really, the political situation in the Middle East does not guarantee stability of any sort, or acceptance. Picture yourself in the midst of a civil war, your children killed, life unstable, wives taken away, husbands slaughtered, religious fanatic ideology being pushed down your throat- can’t imagine it, right?

So, in all truth- can you fathom yourself to be in a situation like these refugees? Empathy works either so you can put yourself in someone else’s shoes, or if theses shoes are too tight to fit your feet a.k.a your mind, then please- try to see that this is such a grave situation, even you can’t imagine the consequences on yourself- which means it’s pretty bad.

One of the more shocking arguments I saw was that the refugees were supposedly all muslim, and that they were going to be a threat to British values. There are christian refugees just as well as muslim, and the idea that these people are going to try and take over the state does not need a complex and sophisticated response- it is plain common sense.

Simply put, there is a higher change that these refugees are trying to escape ISIS and integrate into the new found society they find themselves in, rather than take over the state.

A lot of these arguments are around the facts of the past- why couldn’t they have done this, why don’t we look at these people first etc, in all truth- why couldn’t you? The situation in Syria is not a sudden blow up, it’s years of graduating tensions, ranging from chemical attacks to ISIS terror- any common sense individual, or so- well educated, would be able to know that the result of this would be wanting to get out of the area, completely. Mehdi Hassan had reported that David Cameron, in a parliamentary debate about entering Syria had said he was trying to escape a situation where there would be people trying to get out and refugees everywhere, which obviously had failed. To some extent, this was inevitable.

3. They are going to steal our jobs.

Response: This is probably one of the most comedic of responses, and borderline racist- are migrants really going to “unlawfully appropriate property belonging to another?”(Theft Act, 1968)
Is a contract to work a trade for a set amount of hours really considered as ‘unlawful? and ‘property’? To act unlawfully implies to act outside of the law, rendering your activities as criminal. Therefore, you decide to personally make a potential migrant/refugee (I’m aware of the difference) entering into the country as an unlawful act- when they have been legally accepted into the United Kingdom with the rights to work, just like you.

I generally do hate to point out character traits of the people who generally make these comments- because it leads to stereotyping. Therefore, it should be known that is only a small minority who are middle aged, unemployed, young and unemployed with little education who are like this.

These are the three most common excuses I have heard, have you heard anymore? If so, please comment below.