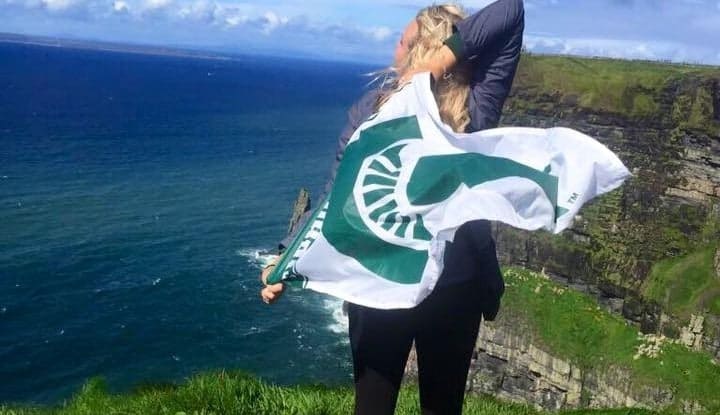 I never believed in luck, but after an acceptance letter from the University College Dublin, a pretty pricey plane ticket and the most amazing four months of my life I have to say I’ve changed my mind. On August 31st, immensely overjoyed and a little scared, I got on a plane, stuffed animal monkey in hand, going from Detroit, Michigan to Dublin, Ireland.

When I first landed the mistakes I made were that out of a television sitcom, starting with getting on the wrong bus and ending up on the north side of Dublin while my college sat on the south. But, adjusting to the culture went smoother than expected, I learned that “tree” usually meant “three” and that even though Niall Horan is from Ireland it’s still not cool to like One Direction as much as I do.

After about a week, once I felt I was ready to go to the nearest Tesco without being confused, me and my two roommates (whom I loved dearly from the moment I met them) decided it was time to make some friends. Making friends was a breeze for me, some might say my specialty, but me and my roommates didn’t want just friends we wanted Irish friends, “You make American friends in America and you make Irish friends in Ireland” was our thought process.

Long story short, we succeeded in our quest, something I will be forever thankful for. We learned all we could from our six Irish friends, the slang, the history, we even made at least 10 more Irish friends because of them. We felt accomplished having immersed ourselves in the culture to the extent that we did. Sometimes we would even make the narcissistic claim that “We had the best study abroad trip out of everyone that has every studied abroad in America”, it was a bit of a stretch but we truly felt this way.

Throughout the four months I made sure that the plane ticket that I paid an arm and a leg for didn’t go to waste. The cool thing about Europe is once you pay your entire life savings to get there, traveling around the continent seems so cheap. So, we discovered the 8th wonder of the world, Ryanair and their amazingly priced flights, and we saw Europe.

Over the four months I was able to visit 5 countries. Prior to this trip I had only ever been to Canada which is why this trip was so eye-opening for me. I saw different cultures, I heard languages I had really never heard before; for once in my life I was the odd one out and I loved it. I loved doing all of these things because I truly never thought I would have been able to in my life. I never thought I would ever see the Roman Colosseum but by the end of our trip I had walked past it 5 times, by the 5th I had only glanced at it and kept walking.

From my four months gallivanting around Europe I learned 3 things. One, that friendship is a gift and when you’ve found a good one, or in my case 6 good ones, it can really change your life. Two, if you think your dreams are impossible they most likely aren’t and accomplishing them will give you the greatest satisfaction imaginable and will warm your heart with new memories. Three, the world is a big place, you know this, but it takes a small amount of traveling to realize how big it really is. While I love America my travels made me realize that sometimes the grass really is greener on the other side if you find the right field. So, if I could give any piece of advice it would be to travel all that you can because your world is as big as you make it.