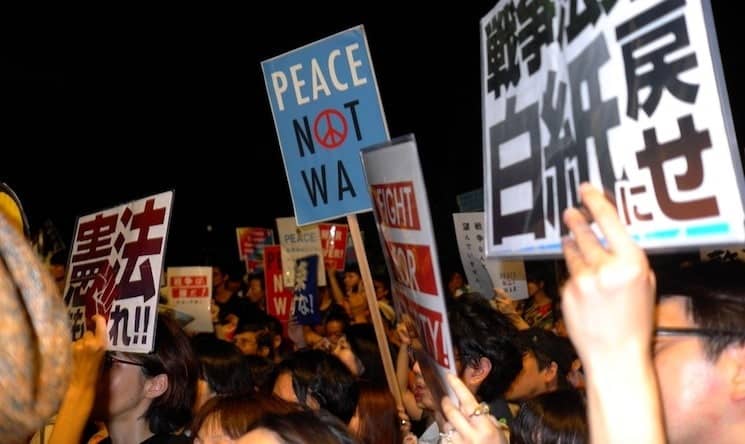 This month, viral images of three-year-old Aylan Kurdi’s drowned body has been a crucial reminder of the harsh reality of today’s refugee crisis. They have thankfully been a wake-up call, to governments and citizens alike, that we should be welcoming these refugees into a safer land instead of closing our country’s doors to those most in need of our help.

However, at the heart of the tragic photos released there is an even stronger reminder of the consequences of war. Aylan Kurdi did not drown because the boat he was on capsized, or because his family chose to board the boat initially – he drowned because the war forced his family to flee their home, along with tens of thousands of others. It is therefore important that when we see these images we realise that, above the call of the refugees for safe land, there is a unified cry for peace. Today, we as young people are in a better position than ever to do something about this, and one such way is through Peace One Day.

In 1999, British actor and filmmaker Jeremy Gilley founded Peace One Day, a non-governmental organisation whose main priority was to establish an international day of peace. This goal was eventually achieved in 2001, when the United Nations officially adopted the 21st of September as a global day of ceasefire and non-violence. Since then, the Peace One Day team have worked in over 70 countries on the day, with schools, communities, individuals and businesses, to make people’s lives more peaceful. For me, perhaps one of the most profoundly inspiring examples of their work comes through their partnership with Unicef. Each year, Peace One Day team up with Unicef and the World Health Organisation to deliver polio vaccinations to children in parts of Afghanistan which are usually deemed too dangerous to access. The reason they are able to reach these areas– and this really is an incredible achievement – is due to the Taliban, who have agreed to honour the day of peace by not harming the health care workers on the day. Millions of lives are saved each year as a result, and the same amounts of compassion and humanity can be seen all across the globe on September the 21st.

As young people, we can play an important part in the struggle for peace.

Spread the word!! An international day of peace won’t work unless the international community is aware of the day, so be sure to tell as many people you can about it. Last year over 1 billion people were aware of Peace Day, and the goal is 3 billion by 2017!

Peace is one of the most important things we can work towards for the future, regardless of how much of an unattainable a goal it may seem, because as long as we do, lives will be saved. If wars and inequality and preventable illnesses continue to spread, it is young people like Aylan Kurdi who will continue to suffer the most – but this is our chance to show the world that young people will not be the victims anymore. Peace One Day is, relatively speaking, a young organisation, but that is what makes it even more special , it goes to show that it is not the years that matter, it’s what you do with the them that counts. So whatever you choose to do on the 21st of September in the name of young people, make it count.

“If you build a house, you start with one brick. If we want to build peace, why not start with one day?” – Jeremy Gilley, CEO Peace One Day (http://www.peaceoneday.org/)

I hope you enjoyed my first blog post! I love meeting and talking to new people, so come and say hi on twitter! – @ShootTheSmiley